RIBA Fiddles While the Industry Burns  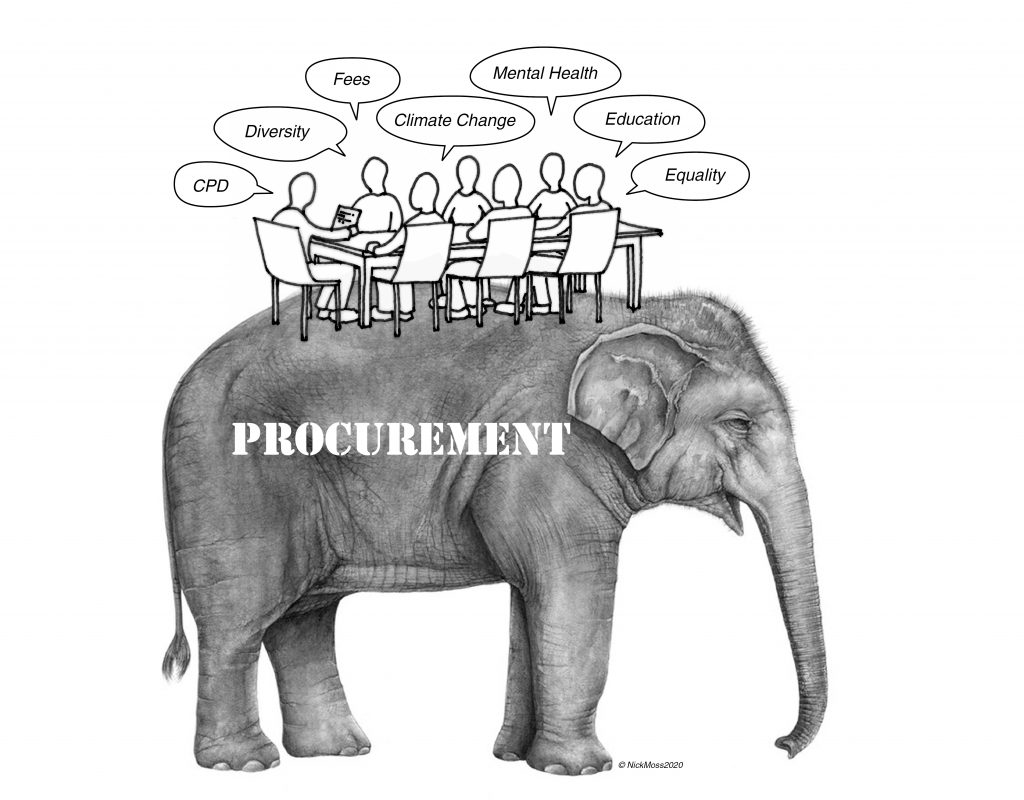 The elephant in the room shows no sign of leaving

A high-end chain of sandwich shops wants to create a new flagship sandwich.  The owners hire a chef to create a recipe for the sandwich.  The chef creates the recipe, which is approved by the owners.  The owners then put the production of the sandwich out to tender, accepting the lowest bid.  But then, the company that won the tender finds that they can’t actually make the sandwich for the price they quoted; the time it takes to make the sandwich is much longer than they thought it would be and the ingredients are too expensive.  In order to fulfil the contract, they call in their own chef, who uses cheaper ingredients and take less care about how the sandwich is presented, despite the original chef’s protestations.  In the end, the sandwich bears little resemblance to the chef’s original vision. The chef is disappointed to have their name associated with it and displeased that the cost cutting has resulted in them being paid less.  The owners of the sandwich shop are disappointed because the sandwich is an inferior product and doesn’t sell well, which in turn means less customers, particularly returning ones.  The production company are disappointed because they have seen little reward for their effort.

Hands up who thinks this is a good way to do business?  And yet, this is what happens every day in the process of procurement.  The sandwich shop owners are the client, the chef is the architect and the production company is the developer.  Put in a different context, the whole things seems a little absurd and calling it Value Engineering doesn’t make the sandwich any more palatable.

In 2019, I stood for RIBA President on a single issue platform- Procurement.  I didn’t expect to win, knowing that the Presidency is largely seen as a gong in the later stages of a good architect’s career- and preferably one from London at that.  But I still gave it my best shot and it was an effective way to raise the profile of the issue.  As it turned out, I fielded a substantial number of votes.

I think it’s worth reiterating the central strand of that platform:

‘Architects are in the untenable position of having responsibility without control. This marginalisation makes it difficult to address all the issues that matter.  The elephant in the room is procurement.  Procurement underpins everything. Procurement is choking our industry at all levels and stages.  This lamentable system works badly for everyone, including our clients. A vicious cycle of deteriorating service is creating an impoverished built environment. Grenfell has shown modern procurement’s race to the bottom can have catastrophic results.’

During that election, I had an open letter on the subject published in Building Design Magazine, which was read by over 30,000 people.  Add that to the votes, add the votes to the messages of support I received from a wide range of people in the construction industry and it adds up to an avalanche of concern.

The previous RIBA President, Alan Jones, recently published an article on procurement in the RIBA Journal.  In it, he says:

‘Procurement is the one topic that every RIBA practice owner will likely agree needs improvement.’

As hints go, I think that one’s fairly unequivocal. The only way a matter of this magnitude can be resolved is by a large, central organisation such as the RIBA committing to it. To date, the RIBA’s neglect of this subject has led to the architect’s catastrophically diminishing role, let alone the effect on the end user and the built environment generally.  It’s time to stop talking and start doing.  Ignoring the elephant in the room because it’s big and unwieldy amounts to fiddling while the industry burns.